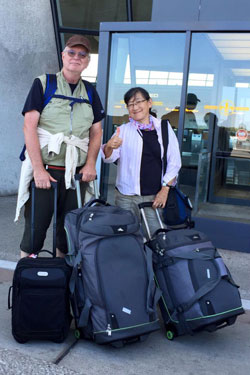 Sweet Briar College professor of anthropology Claudia Chang and her husband, Perry Tourtellotte, are spending the fall 2015 semester excavating an Iron Age site in the Talgar region of Kazakhstan. They also will be conducting surveys in this area. In November, they will visit India, Singapore, Indonesia and Malaysia. This blog documents their scientific research and travels visually and descriptively.

Perry takes the stunning photos of their regular life, research and travels, while Claudia writes the commentaries.

For more information, you can also visit their Facebook page.

This is our last week in Kazakhstan. Perry is busy photographing and organizing our sherds from this year’s excavations. I have been madly trying to organize and finish the last bits of my monograph on our research in Kazakhstan so I can send it off to a book editor for review. Outside there is about 3 inches of snow covering the roofs and cars in our neighborhood. It really has turned overnight from fall into winter. We had an exciting last two weeks. On Friday Perry took a trip with our friend Erlan to inspect some road right-of-ways for archaeological … Read More

Lessons from the Field

I learned to teach at Sweet Briar College… when I first arrived in 1981 and on the first day of class I sat at the seminar table in Benedict. One of my favorite students Nicole said, “we didn’t even know who the teacher was, you were so young.” Teaching was hard work, the Physical Anthropology course included a text with 14 chapters, by Thanksgiving we reached Chapter 8. I was in big trouble, but I learned the hard way…human evolution would have to stop at Homo erectus. The Sweet Briar students were forgiving, no one complained and some even told … Read More

We have now in our third week of excavations at the Iron Age site of Tuzusai, a settlement dating from 400 BC to AD 1. Our main hypothesis is that the common lives of the Iron Age people in the Talgar area was based on an economy of both herding and farming. For many years there has been a debate about how nomadic the horse-riding steppe people were during the first millennium BC. Some of you know about the Scythian (described by Herodotus) or the Saka (names given to these nomadic horse-riding confederacies by the Persians. The Scythians were known … Read More

Life in the Republic of Kazakhstan, a former Soviet Republic, always presents a certain degree of bureaucracy left over from the old days. On Monday we had to register the zooarchaeologist at the Office of the Immigration Police in Almaty. To do so, we must obtain an official letter from the Institute of Archaeology stating relevant information such as place of residence, length of stay, etc. Then it is necessary to visit the Office for Immigration Police in Almaty. To do so, we rode on Tramvai 4. From there we submitted all the necessary documents to the official in Window … Read More

We Arrive in Kazakhstan

We arrived in Almaty, Kazakhstan — the most populous city in the Republic — right on the northern edge of the Tian Shan Mountains (known by the Chinese as the Celestial Mountains) on Wednesday morning at 3 a.m. Our friend and neighbor Aibar came to meet us at the airport. Aibar and his wife Kabira have been our Kazakh friends for ten years since 2005. Their family of four children have been our extended Kazakh family: Saule works in Almaty in tourism, Nazerke is studying for her undergraduate degree at the premiere university program in Central Asia, KIMEP University, providing … Read More