We Arrive in Kazakhstan

We arrived in Almaty, Kazakhstan — the most populous city in the Republic — right on the northern edge of the Tian Shan Mountains (known by the Chinese as the Celestial Mountains) on Wednesday morning at 3 a.m. Our friend and neighbor Aibar came to meet us at the airport. Aibar and his wife Kabira have been our Kazakh friends for ten years since 2005. Their family of four children have been our extended Kazakh family: Saule works in Almaty in tourism, Nazerke is studying for her undergraduate degree at the premiere university program in Central Asia, KIMEP University, providing university training in English in the fields of Business, Management, Economics, Law, and Journalism, Ayzhan attends The Kazakh Academy of Sports and Tourism where her specialties are sports’ training, short-distance running, and jumping, and ten-year old Askar loves wrestling, soccer, and is a math whiz at the local village school in Alatau.

In our first two days in Kazakhstan we registered at the office for the local immigration police, a requirement for all foreigners staying more than a month in the Republic of Kazakhstan. Our sponsorship is under the A.H. Margulan Institute of Archaeology and therefore we have been issued official letters from the Institute. The office of the A.H. Margulan Institute of Archaeology is on the third-floor of the marble building of the National Academy of Sciences.

From there we traveled in our friend Yeraly’s 1997 Subaru through the busy streets of Almaty to the Immigration Office. There lines of students, Russian and Central Asian citizens from other Republics have lined up to obtain their residency permits. Yeraly tells us that at the Al-Farabi Kazakh National University where he teaches anthropology and archaeology, over fifty US citizen students have just joined for Russian language training. Since Universities in the Russian Federation have become increasingly difficult to enter for American and European students due to the current economic sanctions, many have now come to the Republic of Kazakhstan for advanced language training.

We stopped at our local lagman place (lagman are homemade pulled noodles), a Uighur traditional food (Uighur are Muslim Turkic peoples occupying Western China, Kazakhstan and Central Asia). Lagman is usually served with bits of meat, peppers, tomatoes, and a delicious spicy sauce. Of course we drink tea with milk, another specialty. 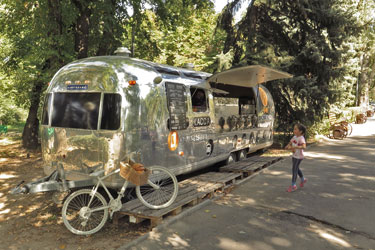 Airstream food truck in a park in Almaty, Kazakhstan.

The next day we came back to Almaty and rode the two year old Metro from Raimbek (the station near the Green Bazaar) to Baikonur station (named after the famous rocket launching place in Kazakhstan). At Raimbek we met the university student Aisha, fashionably dressed in gold loafers, skinny jeans, a blouse, and a beautiful flowered scarf. She translated for us, asking directions to the Station Guards. I told her, you need practice in English and we can try out our bad Russian later on. Later we walked through the park on the way back from the Central Post Office on Ablai Khan street and came across the most extraordinary piece of Americana…an Airstream Trailer re-made as a food truck.

So you probably wonder, when do the archaeologists begin their excavations? It’s like this every field season. The first week to ten days is spent in registration, obtaining official permissions through the Margulan Instititute of Archaeology to dig at Tuzusai (ca. 400 BC to 1 AD), a settlement site we have worked on since the mid-1990s, and getting our Uhas microautobus registered and on the road. All transactions take time, but the pleasure of seeing old friends, the slight morning chill in the air, and the site itself seems full of promise and excitement. 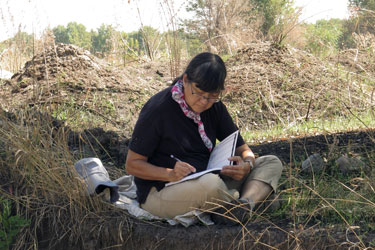 The photograph on the right is of me taking notes on September 9, 2015 as I sat on the edge of our most recent excavations at Tuzusai. This year we hope to finish the pit house we excavated in 2014, clean the entire excavation block, and undertake surveys in the Turgen region. The life of an archaeologist is full of surprises, but it also involves hard work, patience to work through official channels, knowledge of the local language and customs, and the ability to contrast the new Kazakhstan with its ancient cultures. I hope someday soon, one or two of our Sweet Briar students will join us in the field!