This was a good excuse to have lunch at the Turkish restaurant near the office, explore the Nikolski Bazaar, and visit the famous Nikolski Church, a Russian Orthodox Church. Also we needed to find a glasses repair place, but instead came upon a man who does small metal fittings, makes keys and has a vice. So with his fine set of tools he fixed the glasses.

Back to the office at 3 pm way before it was necessary, so we were told to wait some that the passport was not yet processed. Our return at 4:30 pm meant we were shoved from Window #4 which happened to be the place where student registrations were issued, to Window #3 where home-visit registrations were issued, and finally to Window #1 where work visas and registrations were processed. Of course we did not receive the necessary papers until 5:15 pm. I suppose going to the DMV in the US can be as frustrating, so I imagine if you don’t speak even one of the official state languages well, Russian or Kazakh, the average foreigner would be doomed. 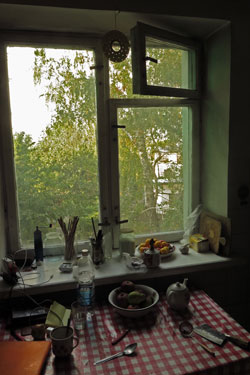 The view out our kitchen window.

Almaty in the fall is lovely. The wide parks and avenues lined with elms, cottonwood, and birch trees and water ditches make the city seem always lush. The trees have not yet turned color and there is a hint of fall in the cool crisp air. The population grows exponentially — everywhere there are children and babies with their parents and grandparents. School children dressed in white blouses and dark skirts or black trousers travel the streets on public transportation or by foot. Today the population is about 70 percent ethnic Kazakh, descendants of the Mongols and other Turkic groups, and about 30 percent of other ethnic groups including Russians, Germans, Koreans, Dungan Chinese, Uighur, Tadjiks, Tatars, Georgians, Chechens, Azerbaijanis, and a host of other groups from the Caucasus.

You probably wonder when we shall start excavations. We wonder too. We have permissions, workers, a driver, and the Uhas jeep is repaired. But what we lack is the car registration, the document saying we have paid taxes on the car, and other important documents such as car inspections, etc. So a week of our stay, I’d say we will be able to start work perhaps a week from today.

In the meantime we have gone to the site to clean last year’s weeds out of the old excavation. Kyra has begun looking at the bone collections from 2014 excavations; already she has discovered the usual sheep, goat, and cattle bones plus some horse and pig bones. She also found in the collections an unidentified long bone of a bird, perhaps a water bird like a crane. No telling what awaits us for this year’s fall excavations.